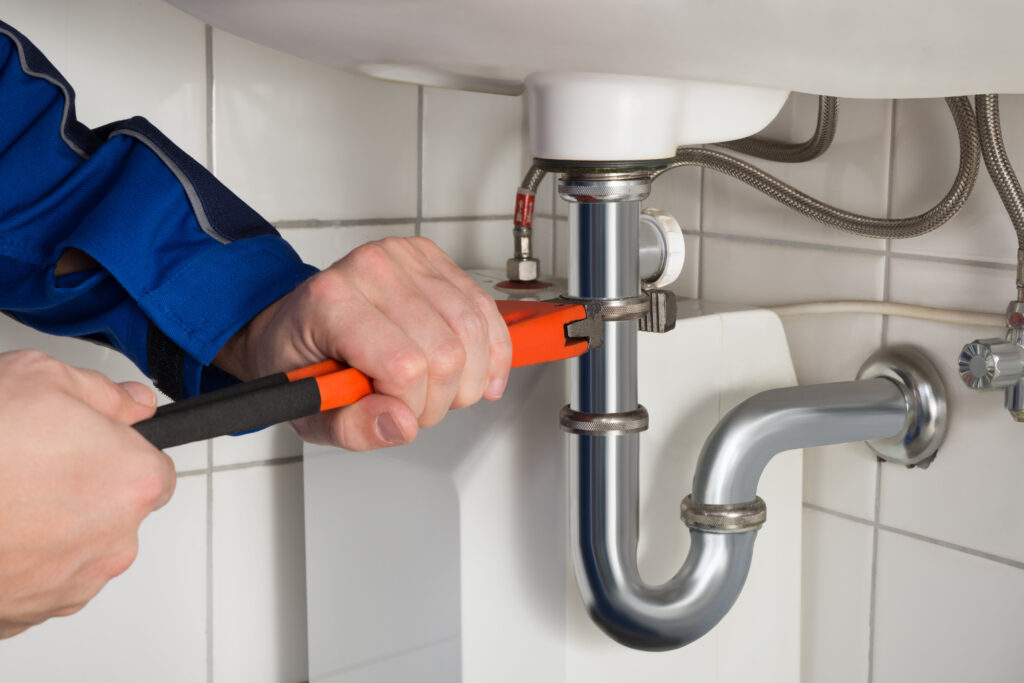 Fixing plumbing can be a real daunting task for people who have no clue what’s going on. It’s actually fairly straightforward though. There are just a few things to keep in mind on how to fix a leaking pipe under the sink that will make make things easy.

Fixing a leaky pipe requires the proper tools and basic knowledge of how the system works, along with which areas are most likely to fail. Plumbers tape will allow for a quick and easy fix around the fittings. Plumbers putty can fix a crack in the pipe itself. Pieces of piping may need replacing as well.

So let’s get into how you can fix a leaky pipe and how easy it really is. You may find that this is a project you can take on yourself!

How Do I Find a Leak Under My Sink?

Finding where the leak is at is crucial to fixing the problem. There are four parts of the under-sink plumbing that are most likely to leak. These areas are the top of the pipe that connects to the sink, the two connections in the p-trap, drain pipes for water to leave the home. Lastly, is the connection that runs into the wall and supplies water to your sink faucet. This is a supply line.

After you have identified the leak, the next thing you need to do is fix it up.

The first step in preparing a leaky sink is making sure there is no water in the supply lines (pipes). Almost every water supply in your house should have a water shut-off valve. For a kitchen sink, this should be located in the cupboard. There will be two knobs. One for hot water, one for cold. Be gentle to avoid breaking a pipe and turn both knobs clockwise (if you live in the United States) to turn off the water.

After the water valve is off, try to turn the faucet on. If no water starts running, then go ahead and proceed to the next step.

Now all you need to do to empty your drain pipes is put a bucket beneath your pipes and let the water drain into it. This could get a little messy so you might want to put down a few rags too. If you are going to end up dismantling your p-trap then take it apart slowly and try to catch as much water as possible.

What Kind Of Repair Does A Leaky Sink Need?

There are a few different repairs your sink may need. The repair method depends on the type of pipe used, where the leak is, and how bad the leak is. We’ll go into some depth in the following sections, but before we do, a little preface. If the leak is really bad, has gone unnoticed for a long time, or has a lot of water damage, it would be best to call a professional. There could be more damage than is visible.

How Do I Use Plumbers Putty?

So, let’s talk about using putty. Putty is best used for fixing holes or cuts in damaged pipes. Don’t use it for trying to seal couplings as that will make removing the pipe very difficult in the future. Grab some sandpaper and scuff up the pipe. The putty will adhere better to a rough surface. Then grab the putty and apply it to the damaged area.

Different putties have different instructions for activating and curing, so make sure to follow any instructions on the putty’s packaging.

How Do I Use Plumbers Tape?

Plumbers tape is used when two threaded couplings aren’t sealing very well. It’s pretty easy to use and very effective. Its technical name is PTFE tape and can seal a pipe for a long time as long as nothing goes terribly wrong.

To use this tape, grab the male end of the thread and the tape. Then wrap the tape around the end by holding the tape flat against the end and moving the thread in the same motion you would use if you were screwing it in (normally clockwise). Some plumbers suggest going around just two or three times, while some suggest up to eight. It all depends on how bad the leak is.

Then, after you’ve turned it around to your heart’s content, just pull the tape until it breaks. Lay any strands of tape against the threads.

When you put the tape on, make sure that you don’t leave it up against the end of the threads. Leave some threading out so that the female end can grab on easily. Doing this will also prevent any tape from breaking off and getting lost in your water system, and could cause clogging.

How Do I Replace A Leaky Pipe Fitting?

First off, let’s define what a pipe fitting is. Fitting is a general term for adapters, couplings, and joints. It’s job is to “fit” two or more pieces of pipe together. A leaky pipe is most likely caused by a faulty coupling. A coupling is anything that joins two pieces of pipe.

Replacing a leaky pipe fitting is the most extensive way of fixing the leak. This involves removing all the parts in the area of the leak and replacing them. Because there are different types of fittings, the following instructions are generalized. You may need to figure some things out on your own, but here are some general rules.

If the leak is coming out of the wall, call a plumber. And be prepared to pay at least $60/hour for a residential plumber.

To remove the p-trap, simply unscrew the two couplings and the p-trap should wiggle out pretty easily. Keep track of all the pieces you are removing so you know how and where to put them back. When disassembling pipes, it’s a great idea to snap a picture of the pipework before you remove any pieces so you have something to reference later.

After you get the part you are replacing free from all the connected parts, simply put in the new pieces and return all the piping to its proper place. It really should be fairly straightforward. If it ends up being more complicated, then it would be best to call a plumber.

These guidelines are for general leak fixes. Just know that there are so many different plumbing types that we could sit here all day and go over each one. These are the general instructions that are good for everyone to know and can save you from having a bigger wet mess. There will be more specific instructions on plumbing parts that you buy.

link to How Long Will A Water Heater Last After It Starts Leaking?

After looking at my water heater, I found something alarming. It was leaking. Aside from the water on the floor, I was concerned with whether I would need to replace it. So how long will a water...