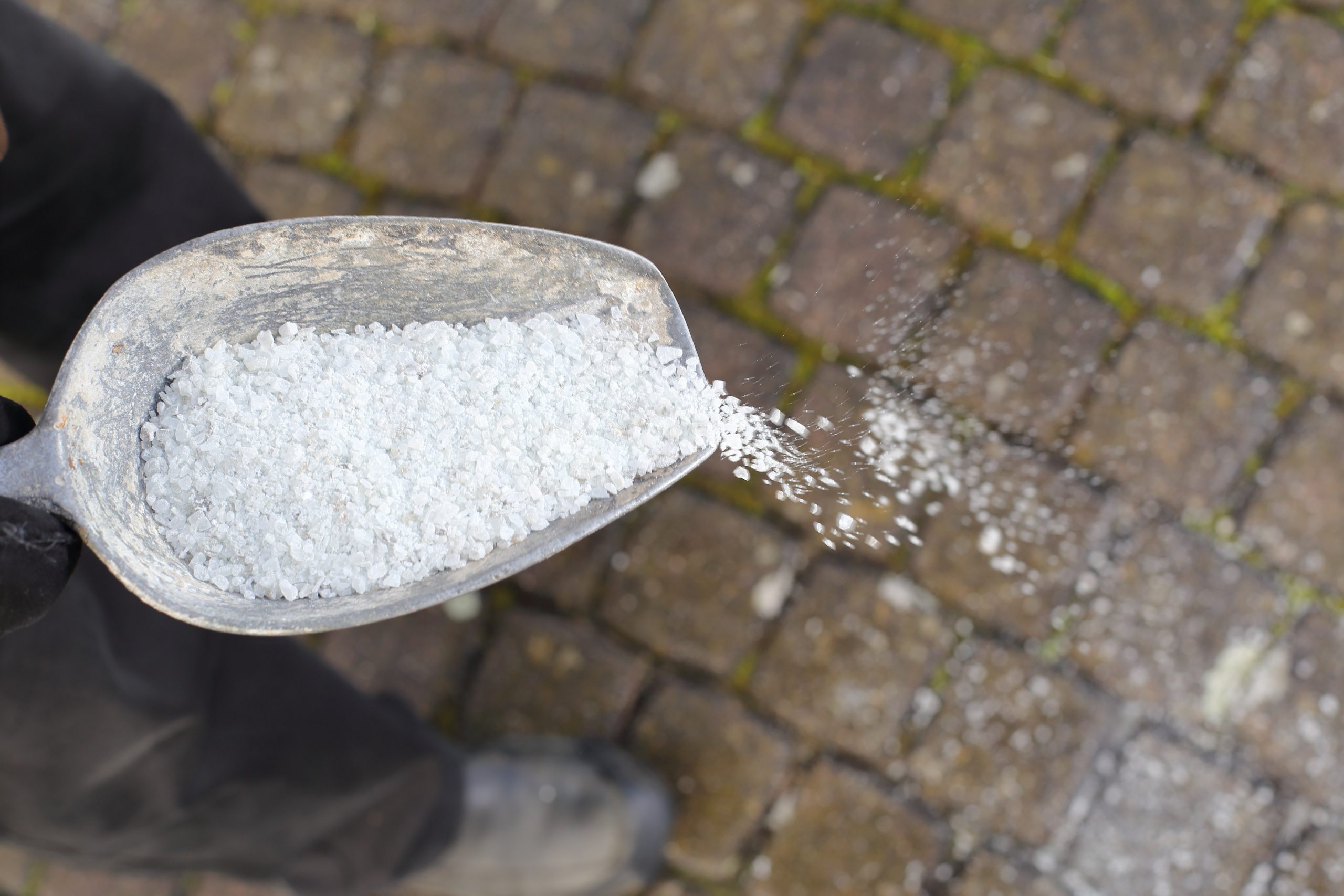 Ice salt is an easy way to melt ice. Adding salt to H2O lowers its freezing point, so the salt slowly melts layers of ice and turns it into liquid water. Electric heaters, ice choppers, and rubbing alcohol also can be used to rid a driveway or sidewalk of ice.

What works best depends on your driveway, so keep reading to learn about each method. If you want to be extra effective, you can try using multiple methods at once to make sure no ice comes within a fifty-mile radius of your house.

This is one of those inventions that seems too advanced to be real. A snow-melting mat does exactly what it says it does; it heats up the road and melts all snow and ice off.

Unfortunately, it’s not nearly as easy as ice salt. You have to call installers to come in and place it on your driveway, and then they’ll pour concrete or asphalt on top of the mats. And installation costs twenty dollars per square foot. That might not seem like a lot, but it adds up quickly, especially if you have a big driveway.

But it’s worth it. You won’t have to pay for salt or try and rip the ice out of the driveway at five in the morning. You keep that on, and you can sleep in, knowing that you’ll be able to drive to work without dealing with ice in your driveway. If you’re interested, you can check out NeverFreeze snow-melting mats on ThermoSoft’s website.

Scraping ice off the driveway isn’t what you want to hear. And besides, it takes forever and the ice scraper barely even works.

You’re right. But using a traditional “ice scraper” isn’t the only way to muscle ice off of your driveway. People who have lived in freezing cold climates their whole lives have had years to experiment with thousands of different methods, and they’ve found that the best way to claw deadly ice off their driveways isn’t by using an ice-scraper. They use a garden pitchfork.

Garden pitchforks aren’t long and thin like classic pitchforks. Instead, they’re shorter with thicker prongs so that they can dig up hard soil in a garden…or ice on a slippery driveway. An ice scraper might have a hard time getting under the ice through layers of snow, but garden pitchforks are made to dig through anything and everything.

They’re much faster at chipping away ice, and they can shovel compacted snow as well. So if you go out to clear your driveway, using a pitchfork means you won’t have to keep switching between a shovel and an ice-scraper.

To see a garden pitchfork in action, check out this YouTube video:

How To Melt Ice Without Salt – Method 3

Last, but certainly not least, is the homemade remedy. And, as a bonus, this actually works extremely well. It’s one of the cheapest options on the list. All you need to do is mix a solution of water and 70% isopropyl alcohol. Spray that on the offending ice, and it will melt away almost immediately.

In a bucket mix the following together:

This is also the reason that alcoholic beverages “on the rocks” will melt the ice quicker than iced tea or ice in water.

There are a million different variations of this remedy, but the simplest method is to mix our recipe above. If the solution fizzes up, don’t worry, that’s normal. Bring an ice scraper or pitchfork like mentioned above for those tough spots.

This solution will melt the ice, but it won’t be able to melt your whole driveway but can certainly do a number on hose tough spots.

No doubt you’ve heard of this before. And if you live in a snow-heavy region, the city probably uses ice salt on the sidewalks and streets, and for good reason. The American Highway Users Alliance found that the use of ice salt on roads reduces collisions by 88%, and it also reduces injuries by 85%.

Ice salt is simple. You can pick it up at the store and hurl it at the ice on your driveway, and your job is done. It usually costs around twenty to forty dollars in ten-to-thirty-pound buckets, but it all depends on the type and whether or not it’s labeled as “safe for pets.”

You can put it on your driveway preemptively or after there’s a thick layer of ice. Either way works. Just know, if you wait to salt your driveway after the ice has already hardened, it will take longer to melt. If the driveway is already salted before it starts snowing, the snow won’t be able to stick or melt into ice at all.

But it’s not just regular cooking salt. This salt is made to melt ice on the road, and there are different varieties based on your needs. You can choose from sodium chloride (rock salt), calcium chloride, magnesium chloride, and calcium magnesium acetate. To learn more about the differences, read this article.

As good as ice salt is, there are some downsides. It’s quick, easy, and relatively inexpensive. But it’s not always safe for pets (unless you buy a “pet-safe” variety), it can pollute the water supply, kill plants, and it can damage your vehicles. But don’t worry. If you don’t want to use ice salt, there are still plenty of ways to get rid of that slippery ice.

This works the same as mentioned above but only mix a smaller amount for your vehicle.

Check out the video below. Works the same as method above but on a smaller scale.