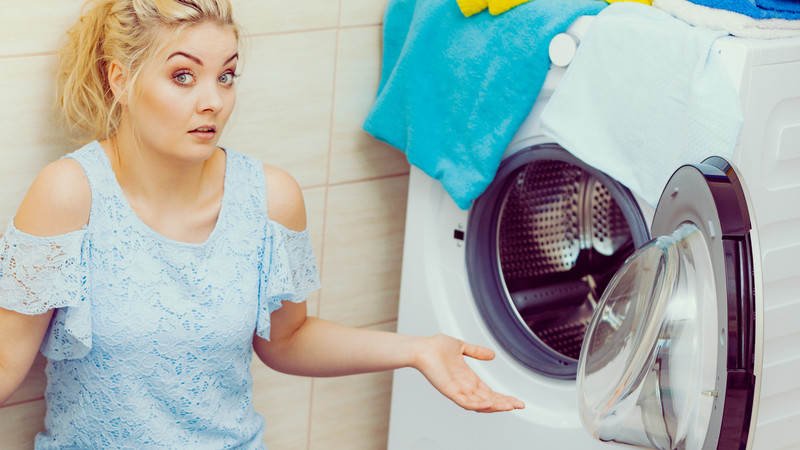 A dryer plays a critical role in a home. It can be essential for making sure that your clothes are dried, even if the sun isn’t shining. However, after many years of service mine was in some trouble. I needed to decide whether to repair or replace it. After spending a few hours looking into the issue, here’s what I discovered.

The older the dryer, the more likely that you will need to deal with significant issues. In most cases, repairing a dryer will cost between $100 to $400. Purchasing a new device will cost between $200 to $1,750, depending on the model that you choose. Because of this, it will usually make more sense to replace the aging dryer.

Trying to decide whether you should repair or replace your dryer is a big financial choice. You want to make sure that you’re getting it right. Let’s examine some of the things that you should know before you pick which action to take.

How Long Does a Dryer Last?

One of the first things that we need to establish is how long a dryer can usually be expected to last. The age of the device is critical when deciding whether it’s best to repair or replace it.

In most cases, a dryer will last for between 10 to 13 years. However, as we’ll discuss later, you might be able to extend its life by maintaining it. Once it reaches 15 years old, it’s at the end of its life. Because of this, there could be numerous mechanical issues that can go wrong.

The age of the device can often have several other impacts. For example, you might find that it’s harder to get parts for older devices. This can increase the costs associated with repairing them. It might also affect the type of issues that you’ll encounter.

What are the Most Common Dryer Issues?

There are a few potential warning signs that your dryer might have started to develop some issues. Some of these problems will have relatively simple solutions. Others will require a more complex fix.

First, you might notice that the dryer is no longer getting the clothes dried properly. If this is happening consistently, you can try adjusting the settings. Sometimes they will just need to spend a little more time in the machine. In other cases, though, the issue might be with the heating element. If it’s broken, the machine won’t get hot enough to dry the clothes.

Another common problem is that the machine starts making some strange noises or vibrating. There are a few reasons why this might be happening. For example, you might be overloading the machine. It’s also possible that the drum seal might have been damaged.

In some cases, you might spot that the dryer is no longer tumbling. This can mean that your clothes aren’t getting dried properly. In this case, there is likely a problem with the belt. Check that it’s still in the right position. If it is, you might need to replace it.

If you have some technical knowledge, you might be able to solve these issues yourself. You can ask the manufacturer for compatible parts. Or you can search the internet for parts that will work with the machine. The instruction manual might be able to help you install them.

If the replacement part doesn’t solve the problem, it’s a sign that there could be a more substantial problem with the machine. You might need to call in a professional to look at the dryer. They will be able to tell you what might be causing the problem. They can also suggest how you might be able to solve it.

Finally, one of the most potentially dangerous issues, especially with older machines, is exposed wiring. In some cases, the plastic might crack over time. To check this, pull the machine away from the wall. Then, take off the back panel and check the wires. It’s also possible that you might notice a smoky smell while it’s in use. As soon as you spot this, you should stop using the machine. Exposed wiring can represent a fire risk.

To fix exposed wiring, you’ll need to get in a professional. In some cases, they might need to re-wire the whole machine. If this is the case, it can be very expensive. Because of this, you’ll often be better served by purchasing a new dryer.

How Much Will Dryer Repairs Cost?

There are a few factors that will affect how much you’ll need to pay to have the device repaired. One of the biggest things to consider is how serious the issue is. Generally, the older the dryer, the more likely that you will need to deal with a serious problem. This can mean spending a lot of money on repairs.

It’s unlikely that you will be covered by a warranty after 15 years. Because of this, you’ll need to handle all of the costs yourself.

There might be some minor variations in the fees associated with the repairman. For example, call-out fees might change slightly. However, on average, you’ll be expected to pay between $100 to $400 to repair a dryer. If the dryer is old, it’s likely to be on the higher end of this scale.

To make this decision, use the 50 percent rule. Compare the costs of repairing to the costs of replacing. If repairs are going to cost more than half the price of buying a new dryer, it’s best to replace the device. If it’s less, you might be better off repairing it.

You can also ask them about their opinion of the condition of the device. This will give you a good idea of the type of problems that you might face in the future. If the dryer is in poor condition, it’s best to purchase a new model.

How Much Does a New Dryer Cost?

Often the cost of a new dryer will play a big role in deciding whether or not you’ll be repairing or replacing the device. The costs associated with a new dryer can often depend on several factors. Let’s look at some of these things and how they might influence the price.

First, you will need to think about the size. For most people, this will be one of the first things that they look at. You need to make sure that you’re choosing something that will be able to accommodate your washing. As a general rule, it should be twice the cubic feet of your washing machine.

The next thing that you’ll need to consider is the type of dryer you want. Often, there will be two options for you to choose from. You can either select gas or an electric model. Typically, gas will be the more expensive option. They can cost $100 more than a similar electric device. However, they will be more energy-efficient, which can deliver savings over the long-term. You’ll need to choose between a top-loading machine and a side loader. This will usually depend on the way your laundry is configured.

You’ll also need to think about the type of features that you want to include. For example, some machines have been programmed for certain settings. This could mean that they will be able to stop your clothes from creasing. High-end machines will also have more advanced displays. They might be able to tell you when it’s time to change the lint or empty the water container.

Finally, consider how energy efficient the device is. This can have a big impact on the long-term costs of running the device. This site goes into more depth about how you can calculate how much it costs to run your dryer.

Because of all these factors, the costs associated with purchasing a dryer can vary. Generally, though a basic electric model will cost between $200 to $400. Gas models might be more expensive and can range from $800 to $1,200. The top-end dryers will often cost around $1,750.

When considering the costs, you might want to think about the costs associated with delivering it. You will often need to pay someone to install the new dryer. Depending on where you purchase the dryer you might be able to organize someone to do this for you. You might require someone to come and remove the old device.

How Can You Extend the Lifespan of Your Dryer?

The older your dryer gets, the more likely that you’ll start to experience some issues. This is a normal part of the aging process. However, through regular maintenance, you’ll be able to extend the lifespan of the dryer. You’ll also be able to help prevent some potential issues.

First, you’ll need to check the outside vent. Sometimes it might get covered by snow or grass. This can block the airflow from the dryer. This can make it harder to get rid of waste products. You might also want to check the exhaust vent inside. This can sometimes get blocked up with wastes, like lint.

There are a few ways that the dryer can deal with the lint from your clothes. It has a lint screen and a trap. You’ll need to clean them out. To clean the lint screen, remove it from the dryer. Then, add some laundry liquid. Rinse it thoroughly. Do this every three months. You’ll need to use a lint brush to clean inside the trap. Do this as often as required.

Not only will cleaning out the dryer extend its life it will also keep your family safe. Dryer fires are a common problem, that affects around 2,900 people each year. In most cases, these fires are caused by a failure to clean out the machine properly. If your dryer has caught fire, it will no longer be safe to use. You will have no choice but to replace it. It’s usually a good idea to get an electrician to inspect the area, to check that the wiring wasn’t damaged in the blaze.

Finally, you should be careful about the way that you use the device. As we mentioned, you’ll need to avoid overloading it. This will force it to work too hard. You will also need to make sure that you’ve removed items from your pockets. Things like metal and plastic will damage your clothes and the machine. They also have the potential to become a fire risk.

Trying to decide whether you want to fix or replace a dryer can be a big choice. You’ll need to consider several factors. This can mean talking to experts and getting quotes. In most cases, though, it will be best to replace the old device. Usually, old models will have a range of issues and might not be in the best condition. The younger models will be more energy-efficient, saving you money over the long-term. Hopefully, you now have a clearer picture of whether it will be best to repair or replace your 15-year-old dryer.

As a long-time homeowner, Dean has been working on his own home projects for over 30 years. He is a licensed real estate agent in the state of Minnesota, helping clients with the buying and selling of their homes.

link to What is the Best Multi-Surface Floor Cleaning Machine?

To get floors really clean I prefer an electric cleaner, but what about multi surfaces? Most can't afford more than one for different floor types. So, I did some research on what is the best...

Continue Reading
link to How to Fix a Stripped Screw Hole: 6 Ways That Work with Wood, Plastic, and Metal

Screwed joints are some of the most secure, and it is all due to the way in which screws wedge themselves into the wood fibers. However, what do you do when wood fibers get torn away and the screw...